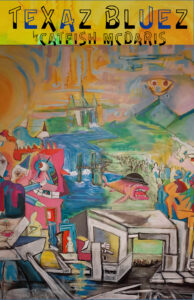 Texaz Bluez in Catfish’s own words: Texaz Bluez is a shot in the heart with a 155 MM Howitzer, in other words, I pull no punches. I learned to shoot Howitzer Artillery Canons in the army near Geronimo’s grave with his eight wives. I quit playing to the crowd long ago. I am my biggest fan. 1-30-2022

McDaris’ hard-hitting poems remind me of when I first read Bukowski. — Charley Plymell, Master of the Wichita Vortex and Last of the Moccasins

The great Catfish McDaris has been wrestling the poem for over 30 years. He’s danced with Bukowski and Jack Micheline, wept with the ghost of Ginsberg, and pined over Frida. His poems have left welts and scars all over the small press landscape, and his fiction nearly garnered him Pulitzer attention. Now he’s wailing the Texaz Bluez, and immortalizing cat mutilators, laughing coyotes, and ass eating strippers. This is Catfish at his peyote eating, chaos chasing, wig flipping best. A small press Vaquero herding poems down cattle trails of god tears. A veteran poet waging war with black death. — Dan Denton, $100-A-WEEK MOTEL

Any piece of paper with a Catfish McDaris poem across it is cause for celebration; a whole book of them is a fiesta. Texaz Bluez is chock full of legendary poems in the making, two-fisted poems that’ll hit you like fresh peyote washed down with Coors while a herd of wild horses stands watching. To read a McDaris poem is to jump into a rented car and head fast for Mexico with an accomplice in a slinky spaghetti strap aubergine dress by your side. Who wouldn’t? — George Wallace, Writer in residence, Walt Whitman Birthplace

These poems helped me kick the blues in the balls on a shit ass Saturday night in San Antonio, Texas with dishes in the sink and the paint drying on another canvas that will be added to the stack in the trash strewn garage. It’s refreshing and rare as hell to read poems that make me laugh out loud and wish I had a Mexican beer (Indio, por favor) to toast the writer. Here’s to coyotes and witches and shredding time. Gracias, Catfish, for getting it down. Salud. — Misti Rainwater-Lites, author of NOISE (Gutter Snob Books)

Catfish McDaris is a fucking legend, he has been a prominent and well established poet/writer for over three decades in the small press: he has published a book with Charles Bukowski and Jack Micheline: books of his words have been published the globe over and translated in numerous languages: he has been nominated countless times for the Pushcart Prize: Texaz Bluez is a ‘mini’ chapbook, but just like the poet’s literary reputation it is a BIG book! Beginning with the wonderful cover art of the ever colourful and vibrant Jeff Filipski and with poems having titles like: That son Of A Bitch Ate My Cat’ ‘Christmas Post Office Blues’ ‘A night in Walpurgis’ ‘A Flying Rotten Rat’ you know that you can’t go wrong here: do yourself a favour and purchase this little gem of a book before they’ve sold out! — John D. Robinson of Holy & Intoxicated

“The inimitable Catfish McDaris gives us his Texaz Bluez which is above all else, a book of escape.  Fitting for a man from the same town as Houdini.  Whether it be by suicide in Laughing Coyote’s Nightmare or Slow-poke Jones giving you the Sayonara Motherfucker, McDaris’ own yearnings for Mexico or “Alcoholics looking for escape from life,” Texaz Bluez is a hot Tamale bolting for the door, looking to breakout.  Filled with cat cannibals and stripper pole kissers, McDaris once again shows you why he is a true of the written word. “- Ryan Quinn Flanagan (Author of Minotaur Snow)