REVIEW by a.m. stein: As Meaningful As Any Other by Donna Snyder

AS MEANINGFUL AS ANY OTHER BY DONNA SNYDER
reviewed by a.m. stein 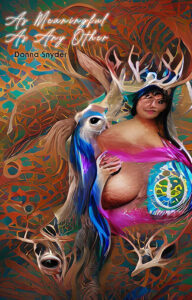 while Night, hidden in her cave, made oracles,

Much of Snyder’s poetry in As Meaningful as Any Other is in the shamanic tradition. The tradition of remembering with our ancient bodies the ancient magics. “Upstretched arms hold the earth steady. … /She carries the world on her head,” writes Snyder.

The energy of Snyder’s shamanic poetry is rooted in the human body which is also the body of our planet. We humans are also rocks and trees, animals and minerals, dinosaurs and stars. We have only to cross the threshold and leave our old lives behind to find this out.

“The wind takes my spirit in its arms and flees. Mama lights the candle, / locks the door,” writes Snyder.

A shamanic poem is a mystic poem but it is also a poem about keeping charge of one’s body, about maintaining access to the pleasures and universes inside those bodies. Shamanic poems are empowerment vehicles, visions of independence. They speak of the resonance, the “purity” (a word Snyder uses) of life lived through the extraordinary, as oppose to the mundane, faculties. Snyder writes

A fairy whispers in my ear that God

is a woman at all times being pleasured.

And out of her pleasure unfolds the world.

Throw yourself into the river of energy… / let the energy ignite

Is….the severed root, the woman who runs away to the desert,

lives in a stone circle with her animals and her words.

The symbolic theme of leaving the home one knows in order to seek a more expansive home, a home for one’s spiritual being, appears early in these poems and comes around often. These are poems about transformation or the desire for transformation.  ”God smiles and pulls the world from between her legs….” Snyder writes.

These are poems that ask what happens to the wild innocent who wants to know the sacred and the illimitable? What must one do who feels herself a part of the sacred and illimitable? Must she leave family and security to become the being she feels called to be? “ A flying creature [with] a starry cloak and a robe like sunrise, a ribbon around her throat like prayers…” Snyder writes in one place. In another place Snyder writes:

“You can find her at the crossroad between death and life. She takes horror and makes it beauty.”

Snakes slept beneath the earth.

I lay on a rock before the mother stone,

sole offering the salt and breath of my flesh.

relentless ecstasy of Ravel, the subliminal messages of Rigoletto, Puccini, and

Tchaikovsky… a beauty that instilled within me an inchoate reverence for sin….

By what means does one find one’s way to this place of resonance? Through what ritual of transformation. What must one leave behind? Snyder continuously asks. Must the artist, the poet, the shaman physically leave home, physically separate themselves from their former lives, in order to leave behind, separate themselves from, certain limitations within themselves? Snyder depicts, vividly, the atmosphere of one such former life. Are its characteristics personal, however, or are they archetypal?

she sits on the divan

a heap of Salem cigarettes grows beside her book

her rage is easier to see than the terror but both

Either way it is a cautionary poem. A poem about the thwarted energies that come from remaining at home (refusing self-transformation) and taking the poison of that refusal (“a heap of…cigarettes grows beside her…”) day by day, year after year. This is the life one could just as well be living if one had not awakened oneself to the possibility of another, such a poem declares. Snyder’s poems urgently want to guide us toward this awakening.

In “Howling After Ginsberg” Snyder’s language burns with the gleeful rebellion that often arrives on the heels of an awakening.  Awakened, the inequities of the world become intolerable. Awakened one’s first impulse is sometimes to shout—or if the awakening is too rude to howl.

I saw the best minds of my generation herded by low IQ dogs who knew no better  than they were taught, Presbyterian shepherds, nipping heels and eyeballing  minds’ eyes until the best minds became sellers to buyers ignorant of planned  obsolescence and unjust wars, illusory hopes to fit in. Millenium’s end and  beginning, cats dead young from opiate crazed needs for respite from darkness.  Burgeoning youth self-sanctified, their solipsistic bird’s eye view of reality—

writes Snyder, taking her cue from that Beat town-crier A.G.

Another awakening poem, “Suddenly Aware of the Dark,” is more tender and graceful and self-aware. Offers a more mature reckoning one might say with the consequences of awakening. In it Snyder writes,

The death of the grandmother sends unconscious fear through her. Her grandmother with her narrow life and pleasures. With her three, count them, channels of “three channels of magic—

orchestras, cowboys, and Disney’s Wonderful World. “and her hillbilly Jesus art hanging on the wall in her sad kitchen. No, not to die like that.”

The grandmother, here, is the poet’s mirror. This grandmother’s life is the life the poet must leave although the poet loves and cherishes some of what that life had offered. The simple pleasure of being with this grandmother. That little bit extra the grandmother had provided. A broadening of the poet’s vision (“three, count them, channels of magic”) a glimpse of scope and possibility (“orchestras, cowboys…)  in a world otherwise a bit flat, a bit lacking in imagination—or, indeed hope.

To live in the world as a shaman you have to allow yourself to accept the magic potential of the world. You either do this or you do not do this.

interpret the signs that surround you. Use the titles of records in the

antique jukebox as a meaningful tool of augury. Throw in the name of the

café in which you find yourself, a pocketful of quarters, and time.

And if you do this and you are a woman then you also know it is woman who makes the world, as Snyder doesn’t stint on reminding her reader. In some of the most energized language in the entire collection, woman is depicted in the fullness of her engagement with the universe.

An aspect of the Triple Goddess

She who embodies abundance

She who effects change

She who wields the power of words

As Meaningful as Any Other, is a consideration of transformation. We are all capable of bettering ourselves, Snyder’s poetry tells us, if we will earnestly seek the way through.