REVIEW by a.m. stein: As Meaningful As Any Other by Donna Snyder 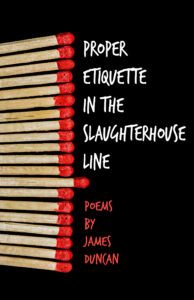 Proper Etiquette in the Slaughterhouse Line by James Duncan

If by our predilections we are so favored by the Muses, then in trying times we may almost count on the discovery or gift of a title, be it of song or in lit, whereby the trial is mitigated; even embraced.  Recently I was sent a title that’s both quirk and puzzle as to belie a collection of poems that are now -and ever shall be- of great value to me.

Proper Etiquette In The Slaughterhouse Line by James Duncan is a book for anyone who is at the mercy of ‘just making a living.’   Over the course of seventeen equally unsettling poems, Mr. Duncan adroitly lays bare that it is the myth of American success that we have to thank for such a condition.  Indeed, our myths are no less potent than the mythology in which the Romans put so much stock, to the point that they became the backdrop of the horrors in their arenas.  Moreover, Duncan traces a lineage from the Colosseum to the modern day American office.

I missed the call from HR while
vomiting blood in the bathroom, holding
my weight against the porcelain sink

There’s no disputing the gods have always savored blood, be it from a sword wound or a stomach ulcer.  And clearly they can easily trade a battlefield strewn with corpses for a corporate headquarters where the dead thump away on keyboards and decide the fate of the living.

I can almost see them
at the conference table out
there in Illinois…
I keep rising in the morning,
I keep fighting when HR
drops my insurance anyway

At the mercy of making a living I have been because I, along with billions of other souls, became an unwitting gladiator when I joined the workforce.  But such is the illuminative force of Mr. Duncan ‘s insight that l, too, can see the matter in true form.

I read these poems on the graveyard shifts of my own monotonous job, and it was on one particular night that verse because epiphanous by way of the real world.  It was the sound of iron and rusting steel stirring over my left shoulder: a train on its track had suddenly come alive and was beginning to pulse into the darkness.

Uncanny, but undeniable.  Mr. Duncan has become so attuned to the themes he’s treating that he can be right there beside the reader.  He’s arrived, and stands on the platform where we wait to meet him.  Poet as prophet.  He bids us to board the train – next stop, Apocalypse.
Revelations are not reserved exclusively for sacred scripture, and Duncan takes off with that fact in the same defiant vein as a Prometheus.  He shows how insidiously the  apocalyptic sits on memos and in emails and texts: information, or our own little arrogant attempts to convey superiority by being “in the know.” But here should be our takeaway – tech is not a substitute for gnosis.

The abrasive but beautifully written stanzas are in lockstep with the day to day reports of current media; and with the anxieties of this and every age.  As we move through the seventeen poems, it’s out from behind the desk and into the wastes.  The desolation and the decay we alone can take credit for.  Thus comes the introduction to the gospel of the zombie spirit.  Behind us we can almost hear the Camelot of companies laughing.

the epilogue will not be kind, either

And why should it be?  The workers of over a century past had their manifesto and look at the number of graves that were dug with it.  A century later, we’re still digging our graves, mourning over the remains of what individual futures we might’ve enjoyed.  Forget penning manifestos, let us become accustomed to chiseling epitaphs, and do the future a great big favor.  Let us be thankful that we at least have such a poet as James Duncan to show us how.  Cry thus!- he orders us.  For where there are tears falling in despair, there’s hope for the seeds of generations born blissfully beyond our orthodox follies.  Their salvation, as James Duncan would have us bear witness to when we are then only Roman ghosts, will be particular to world we of the now cannot know.  They will have the new breath blown through the ruins of a Corporate Colosseum,

…the green light
no longer flashing

Tomorrow night’s graveyard: I go to work with my headstone as a halo, and Proper Etiquette In The Slaughterhouse Line in my bag.